Join Etan on day 2 of his work on the Ukrainian crisis as he tells the stories of an overfilled refugee center, long queues at the Ukrainian border, and a makeshift children's playroom amid the chaos.

"She described children walking for miles with no gloves, people collapsing, and other terrible injuries. People are so scared to leave the queue so they don’t lose their place in line, that they were collapsing..."

‍Every organization with connections to the crisis in Ukraine has given thought or contribution to help support the growing humanitarian crisis that keeps unfolding. This week, Etan Pasternak, our Head of Telehealth and leading expert on mobilizing operational remote assistance, flew to the refugee camps in Poland to offer his hand and our assistance at the ongoing efforts to support the 2-million-plus refugees that have fled the borders of Ukraine. Here is his firsthand and personal account of what he has witnessed.
‍

Day 2, Near the Ukrainian Border, Poland

I didn’t think it was possible to top the day I had yesterday, but I somehow managed to do it today. I started the day in downtown Przemysl. I wanted to return to take some photographs and videos and spend a little bit more time in the train station and seeing the town. Since I wasn’t meeting the Red cross team until late morning, I took the opportunity. The city is beautiful; full of buildings with lots of intricate details and the streets, many paved with stones, were quaint and scenic. I walked by the train station and observed that there was more commotion today than yesterday; it was obvious that there must’ve been a big convoy of refugees that was awaiting travel and to be disbursed into the rest of Europe. There was also a greater military and police presence. Outside, there were people holding signs offering free rides and places to stay. 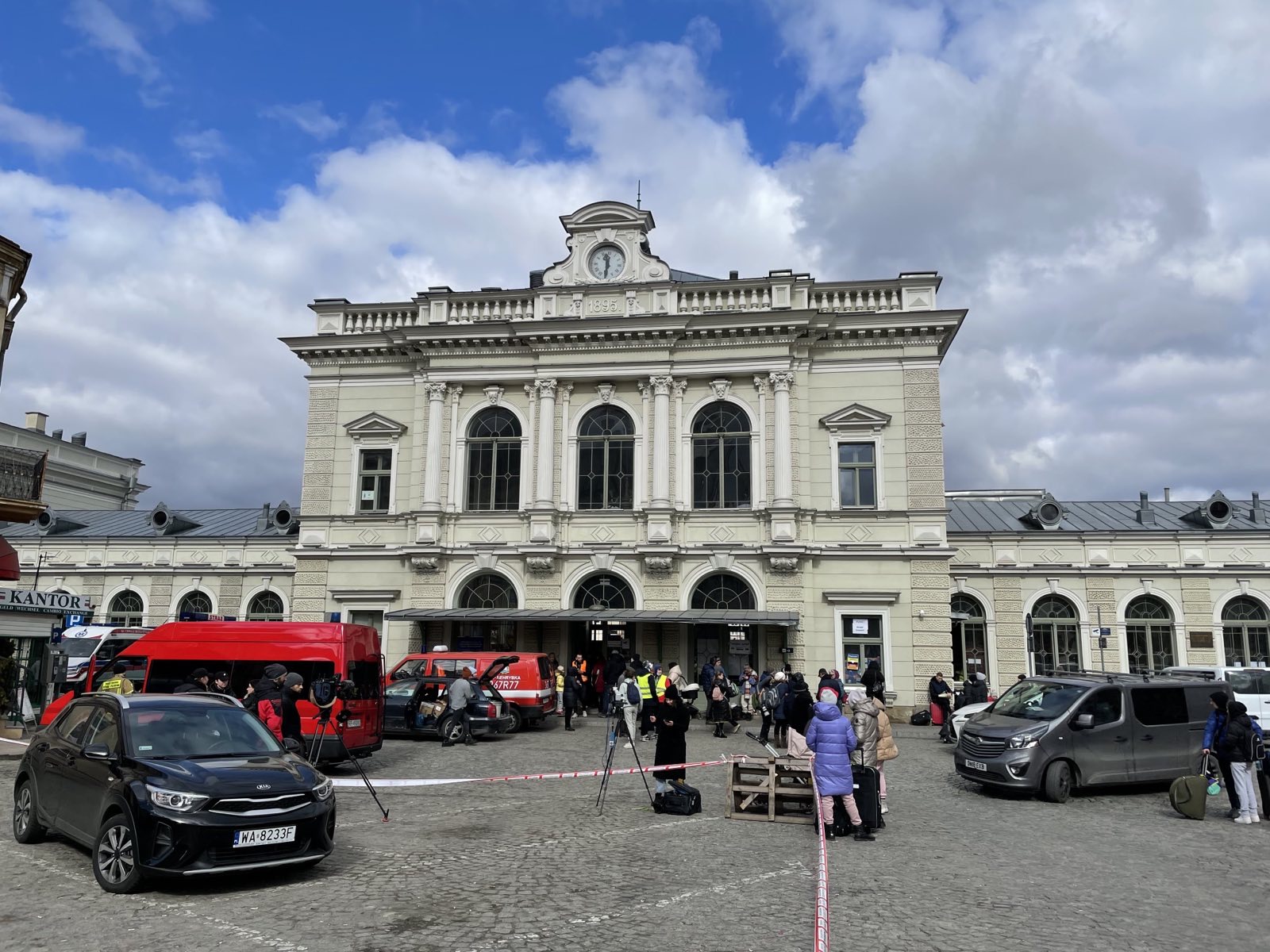 Since the building was overflowing with people, I decided to not enter but rather observe from the outside. After a while, I continued to walk around, at which point I headed back to the refugee center to meet the team. The team today consisted of three doctors, one nurse, and a coordinator. The center was by far more chaotic on the outside than yesterday. There were hundreds of refugees standing, awaiting entry into the building and hundreds more awaiting buses to be transported out.

I was able to enter the building with little issue today and quickly found the team. Yesterday, the team’s social worker and other volunteers had started to create an area for the kids (a playroom). They were scrambling to find a place that was suitable for children, containing and safe. When I left yesterday afternoon, the room was still just an idea. When I arrived today, I was shocked to see the progress that had been made. The area was not only complete with a television playing cartoons, games, and toys but was already filled with children and aid workers supervising them. It was a shining light amid the reality that surrounds. 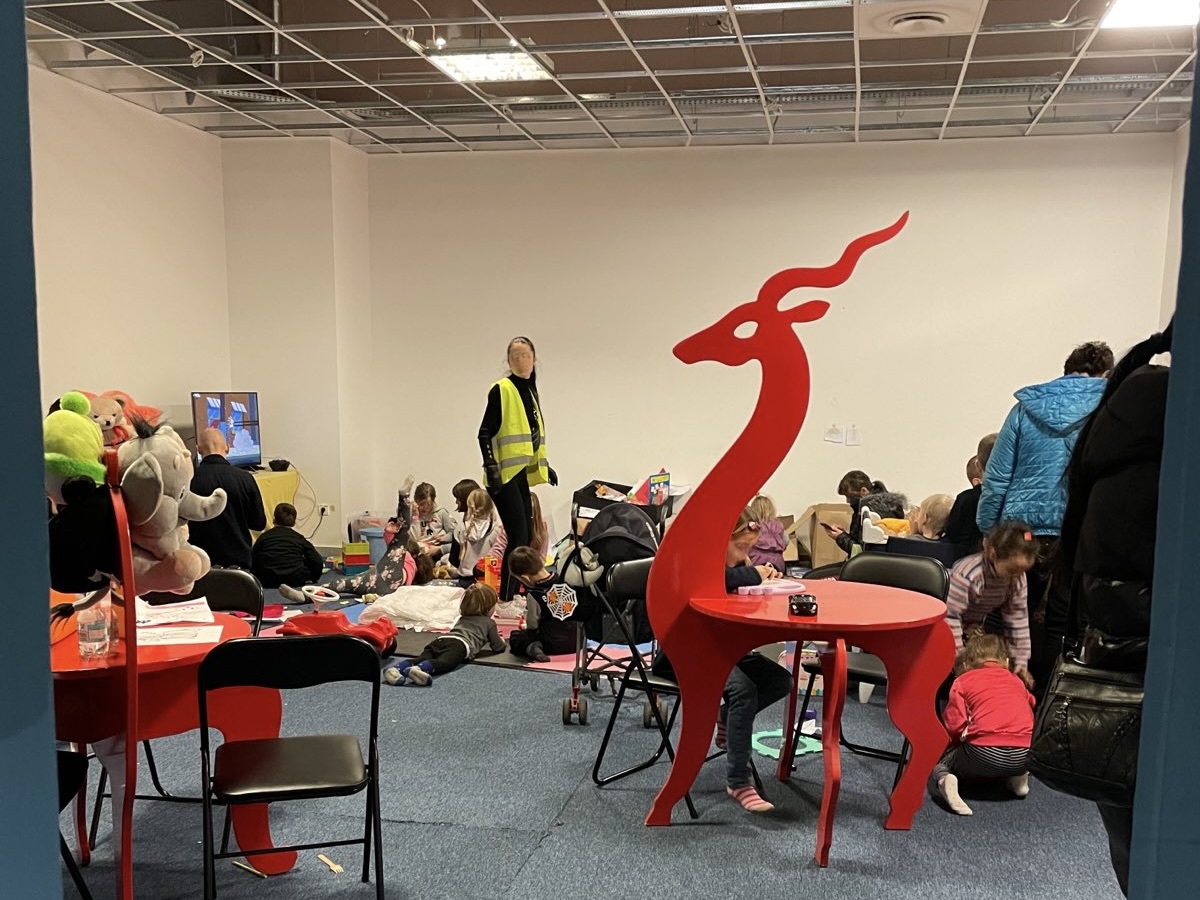 The interior of the center was as busy as it was outside, significantly more busy than yesterday. We did not stay in the center long today, as the team had made arrangements to get a tour of the border crossing. We had been provided a shared location via Google maps, which was about an hour away from our location, closer to the Ukrainian border. This was from a person who had reached out and expressed a dire need for medical personnel to help refugees at the border.

No one really knew what to expect, where we were going, or who we were meeting. There was a lot of speculation on the drive, a lot of good banter, and morale-boosting. Unfortunately shortly after we began our commute, we were rear-ended at a traffic light. No one was hurt although this did delay us for about an hour. The Polish police were called to the scene, took our passports, and returned them 35 minutes later to let us be on our way. The vehicle was damaged from the rear but still drivable.

Once we were released we drove to the location that we were provided. The roads there were windy and narrow and not well maintained. The countryside however, was beautiful and scenic; farmland as far as the eye can see. Along the commute, I saw lines of Polish military vehicles, convoy vehicles filled with supplies, and buses filled with supplies and people. 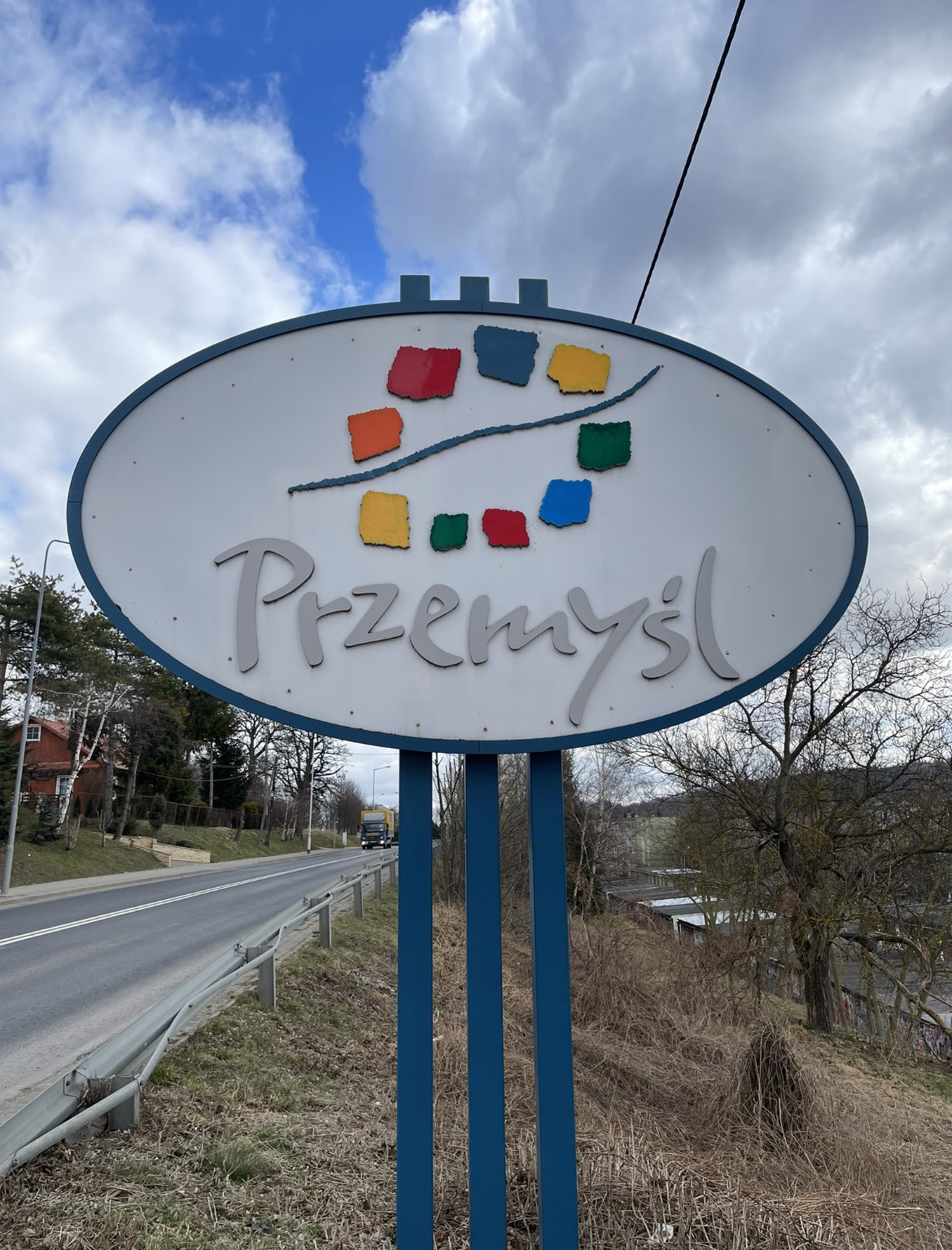 Once a quiet and tranquil city, Przemysl is now
overcrowded with thousands of refugees
fleeing Ukraine

We finally arrived at the location; it was a giant warehouse pretty much in the middle of nowhere. As we pulled in, we could see groups of men and women, all moving rapidly to load and unload trucks, cars, vans, trailers, etc. It was clear that this was a distribution center for donations. Once inside we were greeted warmly and informed that our contact, the manager, was still on the Ukrainian side of the border and will be arriving shortly. We were given a rundown of the facility - it belongs to a company that puts together outdoor festivals. At the start of the war, they shifted their focus from events and used their knowledge of building outdoor cities for festivals, into landing facilities for refugees on the Ukrainian side of the border.

While we waited they invited us in and offered us soup and bread, and coffee and tea. It could’ve been because we were hungry but we unanimously agreed it was the best tasting soup we’ve ever had. We shared a table with other volunteers who were taking a short break from their amazing work. We were located In the upstairs of the building; around the room were cots, sleeping bags, pillows, and personal belongings of the volunteers who were staying there, day and night, to be able to help the refugees.

After a little while, our group joined in to help. There were several tables with Polish women, all standing around putting together food (sandwiches) and other items for the refugees in assembly lines. Each of us put on gloves, took up a station, and joined in. After a little while, our contact arrived and the entire place paused for a moment as she walked in, almost as a symbol of respect; she was clearly a very well-loved person in the building. She is bubbly, kind, and friendly. She brings a larger-than-life aura that’s palpable. An energy that is infectious and empowering. An absolute hero. She came over and gave several of the group big hugs; she was clearly very happy to see us. She had just returned from the other side of the border in Ukraine with just the most devastating reports of what was happening there. She and her team have been manning several outposts along a corridor used for refugees on the Ukrainian side of the border. The queues at the border crossing are several kilometers long. She took us into a private room which was essentially a makeshift office and command center. We sat around a table and she started to explain what was happening. 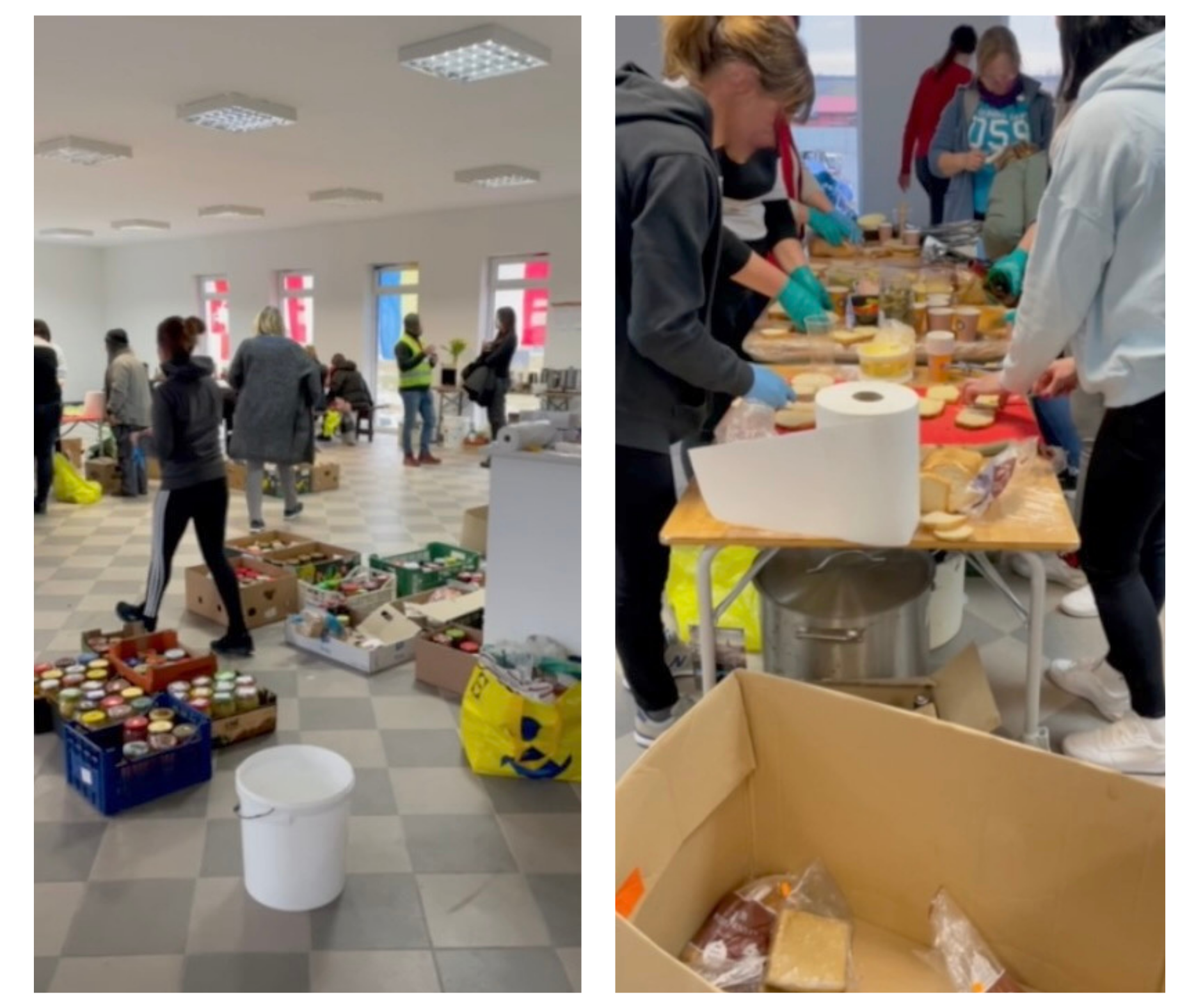 She explained that several people had died in their tent that day from hypothermia and other complications. There were a few paramedics including herself who were there to provide care, although it was not enough. She described children walking for miles with no gloves, people collapsing, and other terrible injuries. People are so scared to leave the queue so they don’t lose their place in line, that they were collapsing and dying right there. Her team is working 24/7 and making several trips back-and-forth every day, bringing supplies, including food blankets, hand and feet warmers, and anything that would help. The border can take several hours for them to cross, which is why they are working 8-hour shifts, 24/7. They are also rescuing lost pets, feeding them, and trying to reunite with their owners. They are in need of blankets, hand/feet warmers, and medical supplies. Another NGO was able to arrange 2 ambulances and medical supplies for them. In addition to working together to build a field hospital and a more structured and comprehensive medical assessment and delivery team.

Because it was getting dark it was advised that we not cross the border today, Instead, the plan is to return tomorrow morning for our team to assess and decide how they can help. I am excited to join the team in crossing into Ukraine tomorrow.

I felt very lucky and grateful for the guidance that the team provided me before I left. Their preparation made me a valuable asset and member of their team (one is none). Feeling safe/comfortable throughout my journey. More to come tomorrow.

Etan Pasternak
Head of Telehealth
Etan Pasternak, Head of Telehealth at Medcase, is an accomplished healthcare leader who focuses on lean process methodologies. Experienced in leading operations for sizeable tertiary care facilities, Value-Based Care models, and IDFS, he is passionate about integrating technology into healthcare operations to assist clinicians and improve patient care and outcomes.

Telehealth
Etan Pasternak
.
4
min read
.
July 28, 2022
March 11, 2022
Ukraine Crisis Relief - A Truly Critical Response (Day 3)
Join Etan on day 3 of his work on the Ukrainian crisis as he tells of the dire need for additional medical assistance and how we can help from thousand of miles away.
Read More