Ukraine Crisis Relief - A Personal Account from the Ground (Day 1)

Etan Pasternak, our Head of Telehealth and leading expert on mobilizing operational remote assistance, flew to the refugee camps in Poland to offer his hand and our assistance at the ongoing efforts to support the 2-million-plus refugees that have fled the borders of Ukraine. Here is a personal account of what he has witnessed.

"Out of the corner of my eye, I noticed a small boy, the same age as my son, crying in his mother's arms; I felt a wave of emotion at that exact moment all hitting me at once. It was a very real reminder that this could happen to any of us and we have to do all that we can to help."

‍Every organization with connections to the crisis in Ukraine has given thought or contribution to help support the growing humanitarian crisis that keeps unfolding. This week, Etan Pasternak, our Head of Telehealth and leading expert on mobilizing operational remote assistance, flew to the refugee camps in Poland to offer his hand and our assistance at the ongoing efforts to support the 2-million-plus refugees that have fled the borders of Ukraine. Here is his firsthand and personal account of what he has witnessed.
‍

I arrived at the refugee holding center in Lwowska, Poland, about a 25-minute drive from where I’m staying. For the first hour, I wandered around outside doing some documenting and a lot of observing. I was surprised at the lack of crowds and the relative calm in the air.
‍

There were a lot of news teams on the ground, everyone filming and documenting, interviewing refugees and aid workers. The outside of the refugee center almost looked abandoned, there were piles of clothing and supplies for refugees to take, and some refugees rummaging through and taking what they needed. There were several families huddled around little fire pits to stay warm and aid workers and drivers gathering refugees to take them to the next destination. There were street vendors, providing free hot food and lines of buses that were empty and awaiting passengers for transport. Also, many tents that seemed to be unoccupied. When I got closer to the giant blue building which is a repurposed warehouse/shopping center that is now housing refugees, they were lines of refugees awaiting entry into the building. 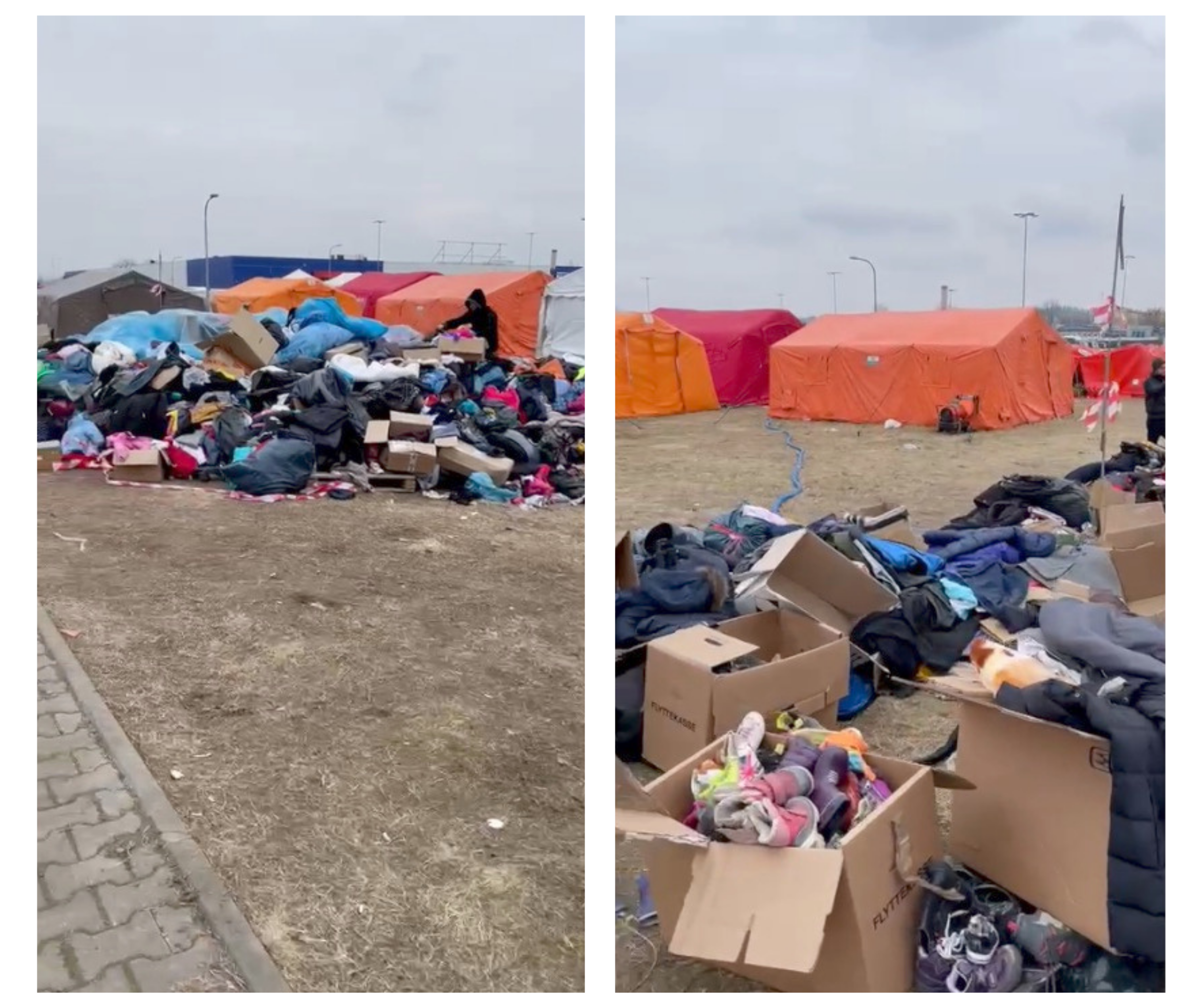 Once inside, there were masses of people crowding the hallways; I noticed there were several markings on the walls, numbered 1 through 13, all the way through the building. The first was a line for driver registration (for those who are willing to take refugees) the second was the longest of the lines - it was where the refugees had to register themselves when arriving. Once they registered, they are given bracelets which grants them access to the rest of the holding facility. The remaining numbers are for specific rooms for holding the refugees. 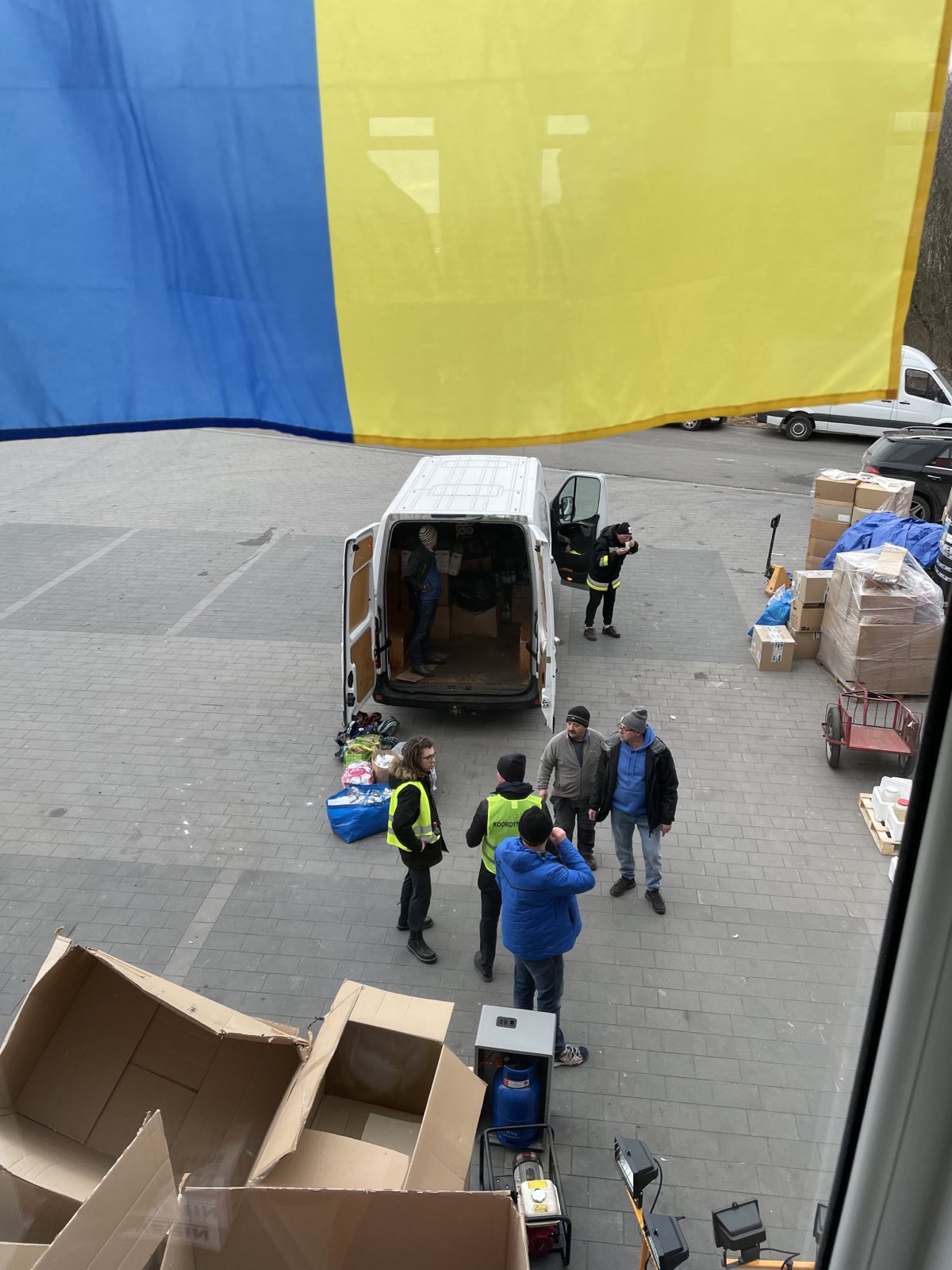 When I found the Red Cross clinic, I asked for my contacts on the team - they were expecting me and seemed happy to see me. I was immediately taken on a tour of the rest of the facility where I was shown the kitchen, which provided 24/7 free hot meals and drinks to whoever wanted. There was also a giant room filled with hundreds of refugees, several smaller rooms filled with wall-to-wall cots, people with their pets and personal belongings, and a large warehouse full of supplies to which we were not granted access. They mentioned that this was the busiest the place had been since they arrived and it was truly filled with people in the hallways, sleeping on cots and on the floors everywhere you looked. I got to spend a lot of time talking with the team and listening to their stories.
‍

During the tour of the facility, we talked about many of the barriers they’re facing. I was surprised by how organized this chaotic place was, there were lots of bright-colored vests representing the aid workers, many with the languages they speak written in marker on their vests. Many also had their titles and skills written as well (nurse, doctor, etc..). Of course, there were also Polish police and military patrolling, but their presence was not really felt. Everyone was courteous and helped one another. I think for the first hour or so, I was so overwhelmed by all that was going on that I didn’t have a chance to truly process what I was witnessing. I only realized this when I took another walk around the building and saw a small little area they blocked off, where many kids were gathering to play, read books, and do some activities. At that moment, it became obvious that this was an attempt to keep them occupied and distracted while their parents were dealing with some very, very serious issues. Out of the corner of my eye, I noticed a small boy, the same age as my son, crying in his mother's arms; I felt a wave of emotion at that exact moment all hitting me at once. It was a very real reminder that this could happen to any of us and we have to do all that we can to help. 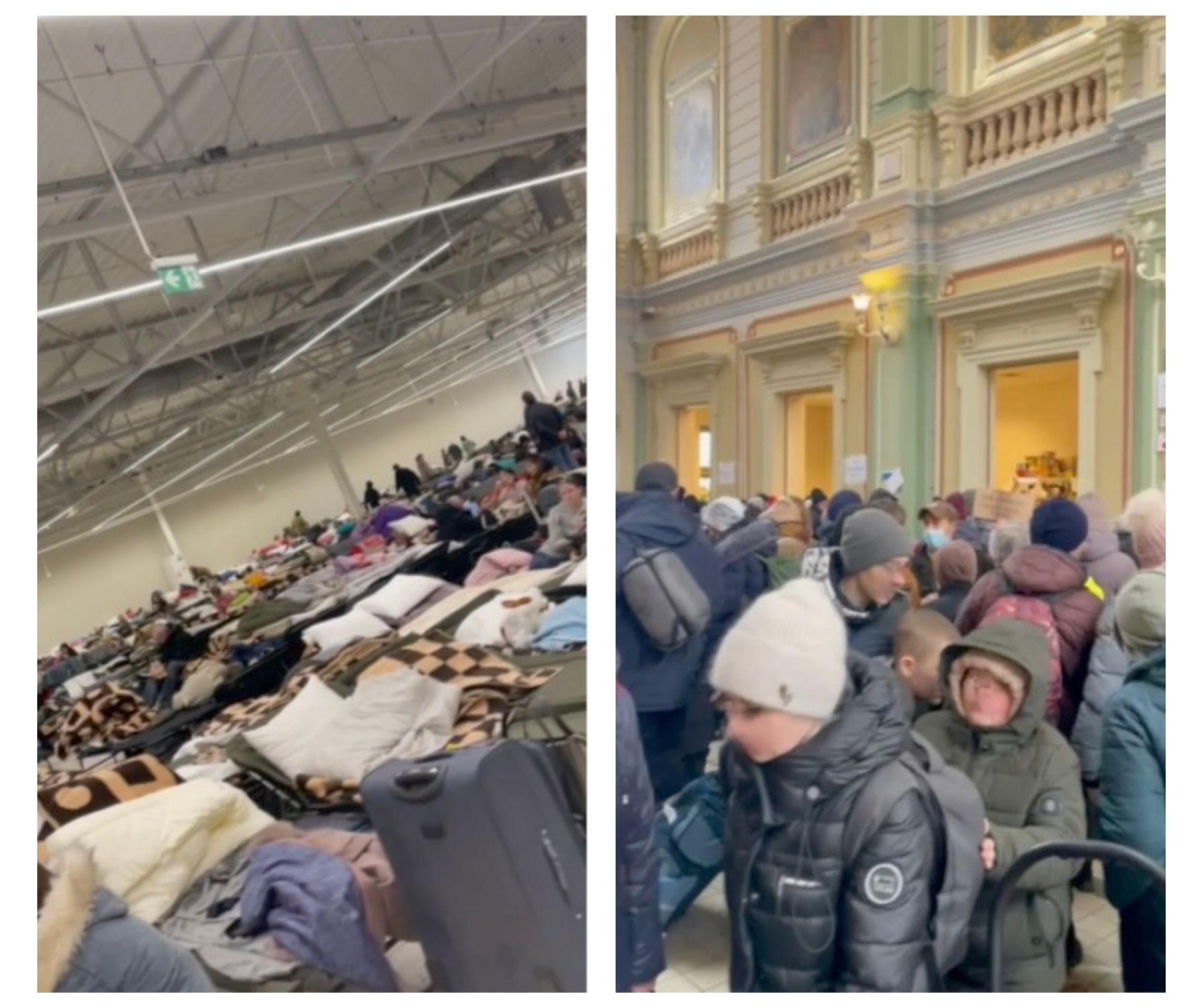 After several hours of being at the facility, helping with little tasks here and there, and working with one of the teams, a group of us left to go and get lunch, as well as hot coffee for the rest of the team. It’s about a 15-minute drive into the heart of Przemsyl. I offered to drive. Once we arrived in the center of the city it was bustling; there were lots of US military personnel, reporters, humanitarian aid workers, in addition to the refugees. We parked about 100 m from the train station unknowingly. We then decided to go into the train station and see what was going on there. Similar to the holding center, the station was packed with people all over, in one of the most beautiful buildings I’ve ever seen. There were people holding signs, offering rides to specific areas, as well as people with megaphones, announcing which trains people should take. There were nuns offering medical assistance and security by the Polish military. We did not stay there long.
‍

After returning back to the holding center with lunch, we ate it together and continued our discussions about their areas of need. Throughout lunch the doctor was called in and out, to help with patients in need - she was the only doctor in the building to my knowledge. Interestingly the doctor is of Ukrainian descent. A few days ago her family, including her parents and sister, crossed the Ukrainian border into Poland, and she was able to meet them in Kraków (amazing side story).
‍

By the time I left at around 6pm local time, the place had nearly emptied out. Many had been able to find rides or transportation to their next destination. They informed me this is typical and the evenings are quieter but when more people ask for medical care. The night shift of Red Cross workers were entering as I was leaving.
‍

I feel honored and humbled to have been able to assist these amazing people who are volunteering their time to help others.

Etan Pasternak
Head of Telehealth
Etan Pasternak, Head of Telehealth at Medcase, is an accomplished healthcare leader who focuses on lean process methodologies. Experienced in leading operations for sizeable tertiary care facilities, Value-Based Care models, and IDFS, he is passionate about integrating technology into healthcare operations to assist clinicians and improve patient care and outcomes.

Telehealth
Etan Pasternak
.
4
min read
.
July 28, 2022
March 11, 2022
Ukraine Crisis Relief - A Truly Critical Response (Day 3)
Join Etan on day 3 of his work on the Ukrainian crisis as he tells of the dire need for additional medical assistance and how we can help from thousand of miles away.
Read More